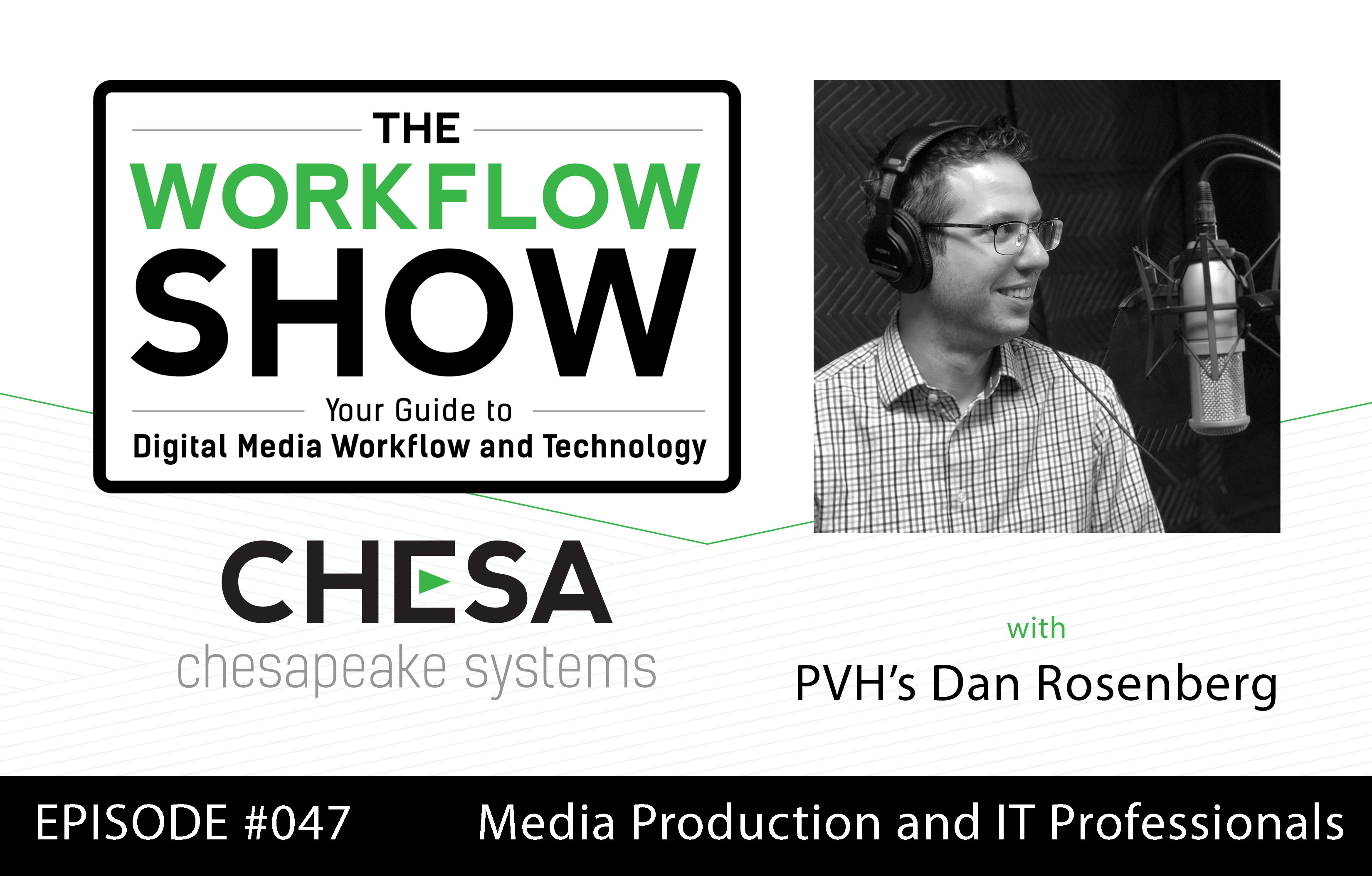 The Workflow Show
#47 "Building a Bridge between Media Production and IT Professionals with Daniel Rosenberg, Lead Creative Technologies, PVH Corp."

Creative professionals are used to driving their technology decisions based on the technical requirements of their media creation processes. What happens when they find themselves working for, or within, a larger company with strict rules and regulations for corporate governance? Or maybe you're an IT professional who now finds themselves saddled with a new group of end users who's needs and requirements are way outside the norm by way of comparison to the rest of the organization? Jason and Ben explore this topic with Daniel Rosenberg, Lead Creative Technologies for PVH Corp., and talk through some strategies for media and IT teams to work together successfully when their worlds collide.
View Full Transcript

This special episode of the The Workflow Show features a panel discussion from our afternoon-long symposium held on July 17 with partners Levels Beyond and Quantum. The event was held at the NYC offices of Quantum. The topic of the gathering was, "Advanced Video Workflows for Today and Tomorrow."  We deliberately set it to be a "think tank," with our audience populated by a select group of clients, prospects and consultants - all interested in learning more about MAM, workflow automation and storage / archive options. The thrust of the opening panel conversation was to discuss, from a "30,000 foot view," the current state and future of advanced video workflows. Chesapeake's Director of Business Development Nick Gold moderated the panel which included Jason Perr, Solution Architecture, Levels Beyond; Scott Morris, Digital Content Consultant / Founder, Greatest Top; and Will McGrath, Strategic Marketing and Technology Partnerships, Quantum. We believe you will find the discussion to be most insightful and beneficial. (l-r) Scott Morris, Nick Gold, Jason Perr, Will McGrath Remember that you can always listen to episodes of The Workflow Show in iTunes. Show length: 1:12:50 Show Notes: Digital Rapids UFC TouchCast Videolicious Montage Majisto Telestream (Pipeline, Vantage) NerVve Technologies Want to discuss your video workflow challenges with us? Email our ProSales team or call us at 410.752.3406.   ... #54 “Education to Innovation: A conversation with Mike Szumlinski of iconik.io Cloud Based Media Asset Management”

On this episode of The Workflow Show, Ben and Jason speak to guest Mike Szumlinski, Chief Commercial Officer at iconik.io, about what it means to foster the growth of a product and creating a collaboration tool for media asset management in the cloud. Mike also talks about his background, working at PVT, and emphasizing the sharing of knowledge via blogs and education. The hosts and Mike discuss how to spot innovation through customer feedback and anticipating growth beyond the current need of a product, including how Iconik utilizes Kubernetes and how that fits into the future of cloud based workflows. Mike recounts his history in the industry, from studying at MSU to working with Pro Video Tech, and eventually Cantemo AB.  Ben and Jason discuss with Mike the importance of education and community learning in Media IT. Mike discusses the values of ICONIK in ease of accessibility to other tools, open API, and the growth of the customer base in the last year due to WFH needs.  Ben, Jason, and Mike dig into using kubernetes and the use of VMs (virtual machines) to better the ICONIK product and what it means for the next round of innovation in media technology. ...